Are You Smarter Than a Multi-Billion Dollar Media Company?

Are you a moviegoer who successfully predicts whether a movie will succeed or flop?

Or are you the type of fan who thinks you could do a better job than Disney at making and marketing movies?

If this sounds like you, you need to watch Disney’s 92-second trailer of its upcoming movie, Cruella.  Scheduled to be released in May 2021, this trailer has over 10 million views since its debut about a month ago.

Disney sets the stage with this description:

“Cruella, which is set in 1970s London amidst the punk rock revolution, follows a young grifter named Estella, a clever and creative girl determined to make a name for herself with her designs. She befriends a pair of young thieves who appreciate her appetite for mischief, and together they are able to build a life for themselves on the London streets. One day, Estella’s flair for fashion catches the eye of the Baroness von Hellman, a fashion legend who is devastatingly chic and terrifyingly haute…their relationship sets in motion a course of events and revelations that will cause Estella to embrace her wicked side and become the raucous, fashionable and revenge-bent Cruella.”

So, are you smarter than a Multi-Billion Dollar Media Company?  Let’s see if you analyzed the trailer and saw the same five issues that fans did.But first, we interrupt this article for a public service announcement question from Late Bloomer.

And honestly, there is no fun in waiting.  Let’s jump on this trailer with our own biases, thoughts, and conclusions now, shall we? 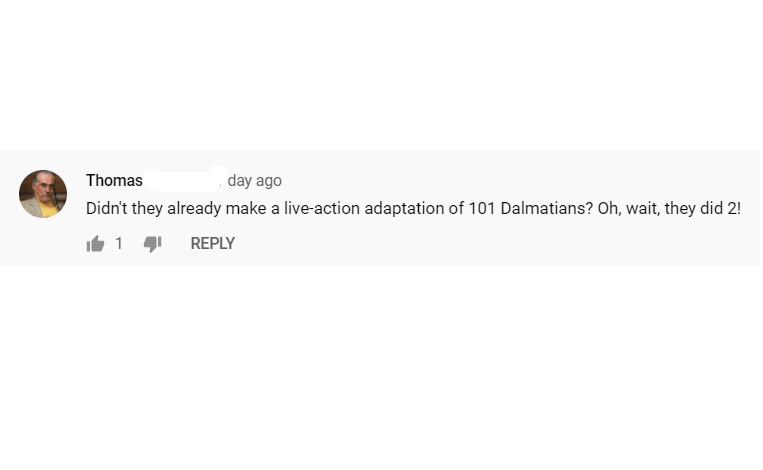 Two, although the trailer projects a scandalous, glam feeling from the beginning, fans don’t buy it. They quickly remind Disney of Cruella’s legacy. Even her tear-stained, make-up smudged face at the end of the trailer fails to garner fans’ sympathy.

One fan did attempt to counteract the callous audience with a dose of reality.

But Kris, we are talking Dalmatian PUPPIES here.  Dalmatians, a breed described as playful, sensitive, and high-energy.  We can’t set aside our rage against puppy abuse even in works of fiction.  We aren’t cruel devils.

Three, while fans did not like Cruella’s legacy, maybe there is something, anything, redeeming about her that attract fans? Maybe her polished looks or charming confidence?

In captivating scenes against the cultural backdrop of London, Cruella makes bold statements such as, “I saw the world differently,” and “I was born brilliant.” Fashionably dressed, she declares her self-assurance, “I wasn’t for everyone,” and “I was ready to make a statement.”

It is a poorly veiled attempt to make Cruella into someone fans cannot imagine her as. They mock the pitch meeting and sarcastically remind Disney of Cruella’s origin story.

Except for Atiya, who tries to make an argument for Cruella’s portrayal.

But she is also inaccurate as Disney has been making strong and imperfect female leads for a long time, e.g., Mulan (1998).

Four, if her unsympathetic legacy and failure to fit a feminist profile aren’t enough, fans point out humorous inconsistencies.

What could have been a quotable line for smart women everywhere is swiftly shattered by NutsDuds’ point.

Maybe Disney should have taken the line suggested by Ka, and minimally fans would be laughing.

And then there is the problematic timeline.

Five, the premise of Cruella lends itself to bad, copycat movies.

In conclusion, even with opportunities for Disney merchandise,

after reading through fans’ comments, perhaps Biscuit was right about the tagline for this movie.

Or maybe see the movie, and you decide–a thought-provoking origin story or a poorly executed stunt designed to compete against DC?

When she is not cruising the comment section for ways to inject her dark humor, Ursula Saqui, Ph.D., drinks tea, runs, and practices being a foodie.  Find her everywhere at UrsulaSaqui.