Why Are There Camels In Australia?

Throughout history, humans have had a bad habit of bringing invasive species with them on their expansionist and colonizing expeditions. Some species have been released on purpose, like the kudzu vine in the southern United States (where farmers were told it would help control soil erosion), and others by accident, like the brown tree snake that hitched a ride on an airplane to Guam and absolutely decimated the native birds there. If you ever get a chance to visit Australia, you could get a chance to see an introduced animal that might surprise you: dromedary camels.

Yeah, there are feral camels in Australia. 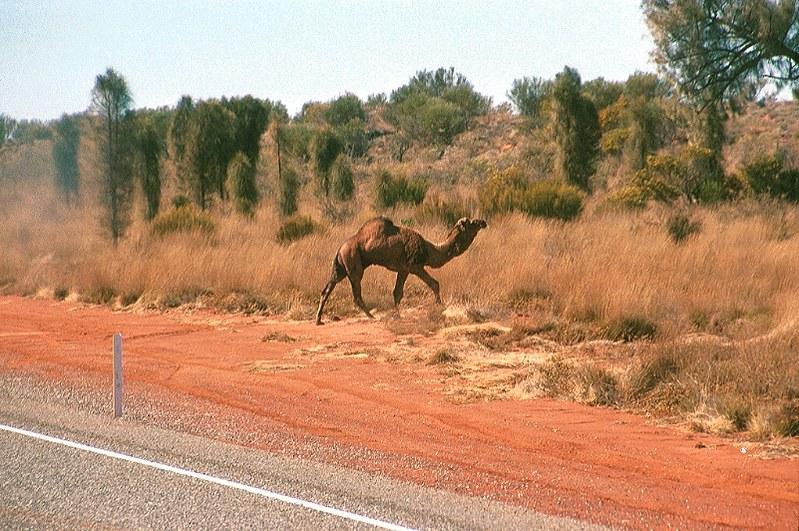 A camel in Australia, to prove I am NOT a liar. Licensed under Creative Commons: https://creativecommons.org/licenses/by-nc-nd/4.0/

Camels were originally brought to the northern and western regions of Australia in the 1840s to help with transportation of both cargo and people. Once cars became more prevalent, camels were rendered obsolete. Not knowing what to do with them, someone had the bright idea to just let the camels wander off into the wild unsupervised. What could possibly go wrong?

Well, it turns out that without human chaperones the camels flourished. As of 2020 Australia is home to the world’s largest camel herd, with more than 3,000,000 of the ungulates trampling and grazing their way across 37% of the continent’s landmass. And all that trampling and grazing has had negative effects on the local plant life, as well as the livestock who depend on those plants for food. They’ve also apparently “fouled” water sources, and I’ll leave it to you to imagine how they might possibly do that. Suffice to say it probably keeps Australia’s dung beetles happy! (Side note: There are dung beetles native to Australia, but other species were introduced specifically to help control the cow poop that we can only imagine was threatening to suffocate the entire population.)

The camels can also cause trouble by encroaching on Aboriginal communities, who still live in many of the remote regions of Australia. After the bushfires at the beginning of 2020 (a year that will forever live in infamy), thousands of camels (and some feral horses) were killed because they were destroying fences and breaking into houses to try to find water. Given this was during a drought, the camels were often hunting for water that people needed to give to their livestock or drink for themselves. And remember kids, no matter how much you love animals, people always come first!

It’s pretty wild to think that the offhand decisions of some cameleers a hundred years ago could lead to a massive herd of feral animals dominating the ecosystem of an entire continent, but hey, that’s history for you.

Darren Incorvaia: If you have bee questions, I’m happy to take them and then forward them to somebody smarter than me on Twitter: @MegaDarren.