Baseball Was Boring Until I Saw This Amazing Clip

I can’t ever remember watching an entire game of baseball either on TV or in person. It’s slow, lacks action, and is often predictable.

So, imagine my surprise when I watched this trending clip of Phillies’ batter Bryce Harper getting hit by a fastball and was immediately intrigued.

As this saga unfolds, I realize I’m not watching a baseball game. I’m watching a sports drama with a complete cast of characters.

I’m hooked from the start of the top of the sixth because it’s tied up at three, and the Cardinals bring in a new pitcher, Génesis Cabrera.  What will happen next?  Will the Cardinals be able to leverage Cabrera’s improving game to shut down the Phillies’ batters and allow no runs in this inning?

No.  But that’s okay because this is when the action starts.

Cardinal’s pitcher Cabrera throws his first ball at 97-mph right into the face of Bryce Harper of the Phillies. Everyone cringes in sympathetic pain.

The next batter up is Didi Gregorius, and now Cabrera hits him in the ribs with a 95-mph fastball! Everyone winces again except the sadistic guy sitting behind the plate who laughs.

The drama has started and now reveals a hero–Harper.  Even though Gregorius was also injured, face versus ribs always wins, especially when there is blood.  And Harper does not disappoint in giving the fans a hero’s performance.

Fans compare themselves to Hero Harper and find themselves merely human.

Because not only is he immortal, but also a class act.

Poor Gregorius doesn’t even get mentioned again in the clip or in the comments section. Nobody cares about his ribs.

But what about Cabrera? Is he the bad guy?

Hitting one batter is an accident.  Hitting two batters in a row is suspicious.  And there are the questionable dramatics occurring at 1:02—his arms flailing up and down, shaking his left hand, rubbing his hands with rosin and dirt.  Maybe he is trying a bit too hard to explain what happened.

Then, the refs huddle to talk about what should happen next.  Phillies fans lean forward in their stadium seats, hoping to see something to make up for the erratic pitches and benefit their team. The refs have three options: do nothing, eject the pitcher if they think the pitches were intentional, or give both teams a warning to avoid retribution.

The emotions of Harper’s teammates mount as they mouth their irritation at the other team. 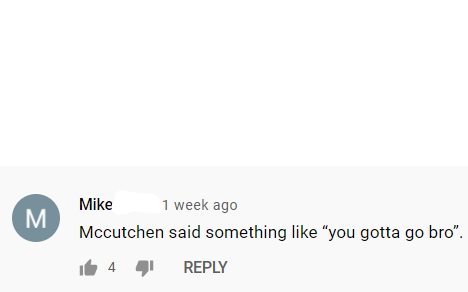 The rub is because of the Major Leagues Baseball’s 2020 three-batter minimum rule and the likelihood that Cabrera would be left in, which meant there could be a third Phillie in the line of fire.

The stakes are raised as the refs issue warnings to BOTH teams.  The hero’s confidant, Coach Joe Girardi, walks onto the field with a verbal protest at 2:08.

He continues his protest with a dramatic hand motion telling the umpire to throw the Cardinal’s pitcher out.

Despite getting himself ejected, Girardi doesn’t leave the stage but instead morphs his protest into a choreographed performance that the fans love:

The conflict starts to subside. But before Girardi leaves the field, he throws a nugget of wisdom to the Cardinal’s pitcher, “Throw the ball over the fucking plate,” to which the Cardinal’s coach meekly responds from his seat, “Leave our fucking pitcher alone, Joe.”

The conclusion to this drama is that the next Phillie batter gets the RBI to take the lead, and the Cardinals take out Cabrera.

While the ending was anti-climactic, Tee sums up the cast that made the three-minute clip worth watching again and again.

And the commentary on this saga has me agreeing with Trey:

Thanks to the guys at Jomboy, baseball is no longer a tedious pastime to be endured but instead a linear narrative of the best dramatic scenes.

When she is not cruising the comment section for ways to inject her dark humor, Ursula Saqui, Ph.D., drinks tea, runs, and practices being a foodie.  Find her everywhere at UrsulaSaqui.