The Song of the Naked-Mole Rat

Naked-mole rats aren’t the most well-known animal, but millennials of a certain age might have an enduring memory of them thanks to the efforts of one TV show: Kim Possible. This show is excellent for many reasons (female empowerment, memorable villains, great humor, etc.), but I’d like to focus on the positive attention it placed on one of the least appreciated mammals on Earth: the naked-mole rat.

Kim Possible’s sidekick, Ron Stoppable, had a pet naked-mole rat named Rufus. Naked-mole rats are actually one of two eusocial mammals (the other being the Damaraland mole-rat), which means they live in colonies with a queen and workers in a manner similar to ants, termites, and some bees and wasps. Ron doesn’t seem overly outgoing, but I guess he provides enough social interaction to sustain Rufus? They do get along very well. 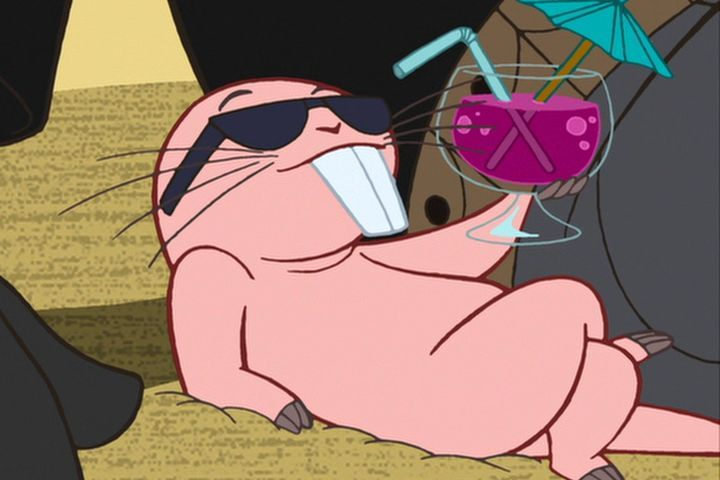 The thing I remember most about Rufus is the naked-mole rat song, officially called the “Naked Mole Rap.” With some fire verses from Ron, strong background vocals, and Rufus’ ad libs, the song is a bona fide bop in every sense of the word. I still randomly get it stuck in my head to this day! And while naked-mole rats can’t actually sing or rap, a new paper published in the journal Science shows that there’s more going on with their vocalizations than we previously thought.

Research led by Dr. Alison Barker has shown that individual naked-mole rats actually greet each other in their dark, underground tunnels using vocal calls that are unique to the colony—basically, each colony has its own dialect, and young naked-mole rats learn their colony’s call from older family members! What’s more, these “soft chirps” seem to be influenced by the colony’s queen; if a queen naked mole-rat died during the study, the dialect began to disintegrate and become less distinctive until a new queen emerged (after a queen dies, other females fight for the chance to reign in her place). What role exactly the queen plays in maintaining the dialect isn’t known yet, but is an exciting question for future research!

Naked-mole rats are fascinating for many reasons: their eusocial lifestyle, their extreme longevity (more than 30 years, the longest lifespan of any rodent), their ability to survive a long time without oxygen (up to 18 minutes), and their resistance to cancer. This new paper is just the beginning of what will surely be an exciting exploration into naked-mole rat communication and cognition, which could even serve as a model for human language acquisition and evolution. The authors point out that naked-mole rats make tons of other vocalizations besides the “soft chirps” they focused on, which means we can all look forward to many more studies unraveling how exactly these subterranean rodents talk to each other in their lightless homes. Who knows, maybe we’ll even find out they can rap after all!