Even Our Furry Friends Are Not Immune to Trolls

If you have ever spent a few minutes (or hours, let’s be honest) watching funny cat and dog videos, you are not alone.

Google trends report that cats led the way in internet searches in 2008 until the summer of 2012 when dogs started to win the internet. Currently, in October 2021, cat and dog searches are almost equal.

But online videos of our furry friends are not to be dismissed as only leisurely fodder.

In her 2015 study of the internet and cats, Jessica Myrick reported that participants felt significantly fewer negative emotions, more positive emotions, and increased energy after viewing cat videos. (Bring that research with you when you get called into your boss’s office.)

With a large fan club and having such positive benefits, you would think our pets would be immune to online trolls.  But they are not.

This 10-minute compilation of funny animal clips gives us the belly laughs we need.  However, these four types of people are low enough to even troll our furry friends.

New York Times author Rosemary Counter wrote that Mom-shaming during the 2020 pandemic was at an all-time high. What parents do (or don’t do) has now come to represent everything about who they are.  Do the wrong thing, and you’ve now been put in the shaming queue.

There has to be at least one type of mom who is off-limits to our shaming behavior.

Shame the single mom who relies on daycare, shame the overweight mom who doesn’t exercise because she is taking care of her family, and shame the mom who feeds by the bottle rather than breast.

But can’t we agree to leave the cat moms alone?

And yet here we are with Sassiebrat and Christy, who Mom-shame without knowing anything about these kitties beyond the fact that they like to give each other high-fives, and they look a little plump.

Hey, maybe Puffball and Mr. Tuxedo have fatty liver syndrome and are living out their last days in glory at having been showcased in the Funny Animals’ Club compilation.

Shame on you, Sassiebrat and Christy, for making assumptions about moms of cats you know nothing about!

A novice troll focuses on top-trolled celebrities like Adele, who are already getting nasty comments, then jumps in with their own sleazy one-liner.  An intermediate troll can take any social media content, like your grandma doing the latest dance craze, and make it into something perverted.

However, a real pro doesn’t make his deviance explicit.  Instead, he weaves in a personal touch with just enough details to create an image in our own minds, so the result is that we feel like the sleazeball.

And the latter is what happened in this video.

Ordinary Mo skips commenting on any of the original content and executes a pro move. He trolls our furry friends by injecting his own indecent exposure experience.  With his timeline of significant events and cringing description, he builds an image that we can’t unsee

We didn’t want to know, Mo.

While many of us probably giggled at minute 4:54, we also wondered why this clip was in a family-friendly collection of pet videos.  Rather than let it go and let our blushing cheeks return to normal, Josemari jumps on the opportunity.  And not only did they call it out, but they then projected this natural animal behavior onto their relationship.

We didn’t need the visual, Josemari.

I’m sure we can all agree that we need some laws to protect our general safety and ensure the protection of our rights. And we can probably agree that some laws are more important than others.

For example, traffic and food safety laws are essential to our well-being.  But this law prohibiting a pinball machine from giving more than 25 free games to a player who keeps winning seems ridiculous.

Robert is an outlier when it comes to seeing distinction among laws.  Rather than enjoy the montage of silly animal antics, Robert chooses to bring up the legality of YouTube thumbnails. 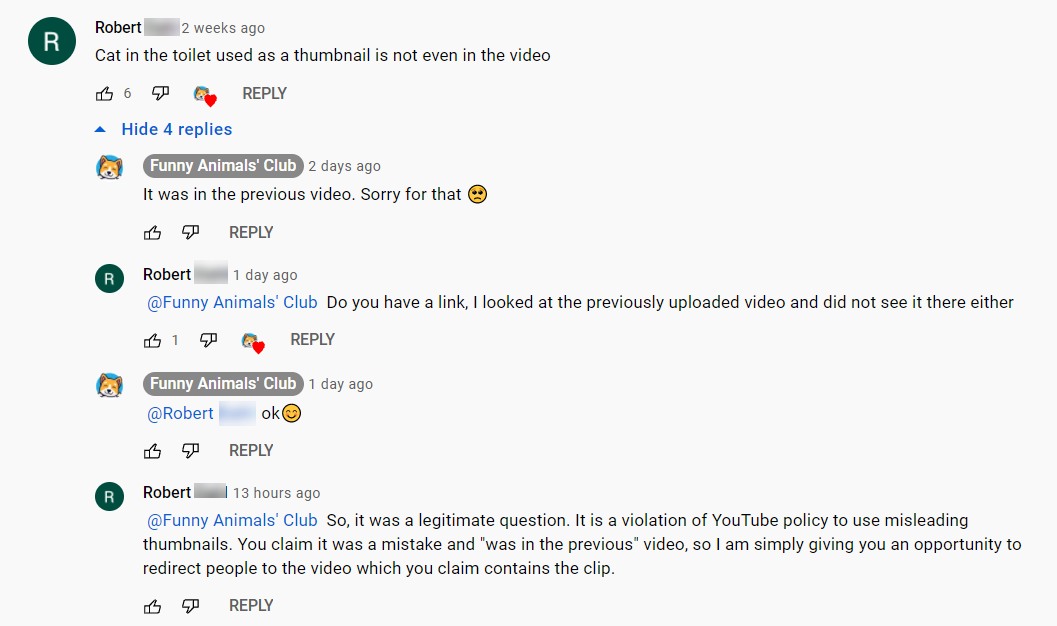 It isn’t about recognition because the creator responded to his comment.  It isn’t about being the expert because no one argued with his information.

Compliance trolls see errors of omission and commission as opportunities to berate users.  Because they do their research, cite the applicable rules, and often see their actions as taking a moral stance, you usually don’t have a way to refute them.

Beware, Robert! Enforcing thumbnails on YouTube videos is a gateway drug. First, it’s thumbnails, and then it’s turning in your neighbors for having their lawn one inch longer than the homeowner’s association rules.

Imagine coming home after a long day at the office.

You change out of your work clothes, grab a snack, and search YouTube for the latest funny cat video.  As you sink into your plushy couch, the video starts.

A hungry feline sneaks fries from her owner’s take-out, gets the sleeve stuck on her head, and just as she is starting to fall off the end of the counter in her attempt to shake it off, you realize THE CAT IS OFF-CENTER.

You turn it off in disgust that someone would make such a poor video and vow never to watch that channel again.

I’m kidding!  Of course, you don’t do this. You are tired from schlepping your ass to and from work and just happy to see something cute and furry on your screen rather than incoming emails.  You don’t care that the creator failed to keep a moving cat framed in the center.

But Laurence and Geneva did care and felt that this compilation was unpleasing enough to pen a comment.

Karl Barth said, “Joy is the simplest form of gratitude.” Laurence, Geneva—can we focus on the joy?  Can we be grateful that our furry friends exist and delight us in ways that fill the emptiness of our 9-to-5 lives? Come on, give it a try!

People can and will take anything, including funny animal videos, and shame, pervert, nitpick, or criticize it. So next time you post something online, and you are trolled, consider yourself in good company with your furry friends. Sit down on your plushy couch, turn on a funny cat or dog video and let the anger melt away (just don’t read the comments).


When she is not cruising the comment sections for ways to inject her dark humor, Ursula Saqui, Ph.D., drinks tea, works out, and practices being a foodie.  Find her on Twitter at @UrsulaSaqui.