I’ll Be Home Quarantined For Christmas #3

Hello, and welcome to my third column! This week I’m going to write about photographic gifts. Should you gift a selfie? How do you know where to crop a picture? What are some easy ways to take good candid pictures? I’ll even go over a quick trick for weird lighting problems. All of this can be done from your smartphone! The examples I provide below all come from my iPhone 8. The photo quality isn’t fantastic, but it gets the job done if you’re printing something no larger than an 8 x 10.

One of the gifts I gave my Mom last year was a framed picture of my Dad at a wedding. I’ll walk us through how I cropped the picture and explain how I got the shot, which is candid.

Here is the original, full picture: 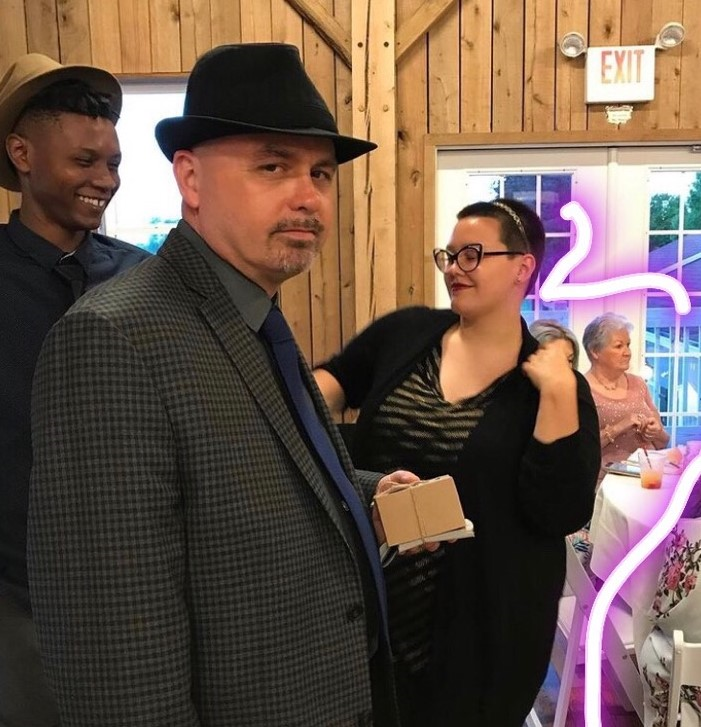 You’ll see three people in the background- two behind my sister and one to her side. The person off to her side is just a leg, but it’s still noticeable. I’ve outlined the background people with neon purple squiggles to make them stand out even more so that you can see how awkwardly they’re placed. I wanted to crop them out (sorry, Great Aunt Norma) if possible!

This is what it looks like when I cut out all three of the background people: 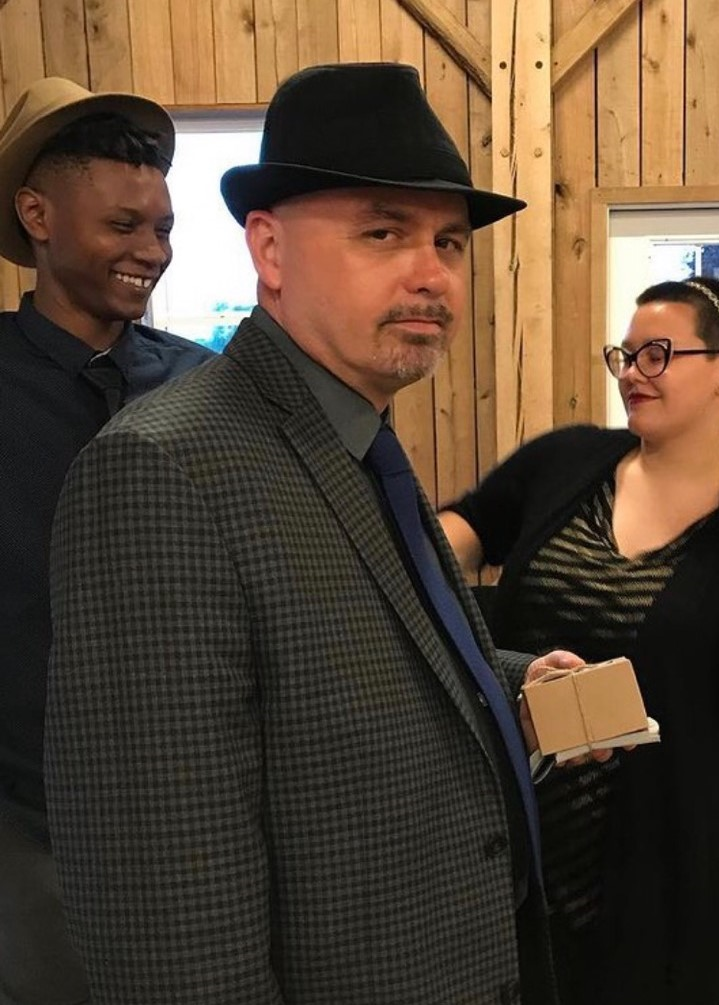 What’s wrong with this version of the picture? Well, it’s missing my sister’s hand and ear. Her hand is the biggie. With one of her hands missing, you can’t see half of her dance move, meaning that you can only see half of what my Dad is shaking his head at, and my Dad is the focal point of the picture. Thus, it did not work. At least not for me! 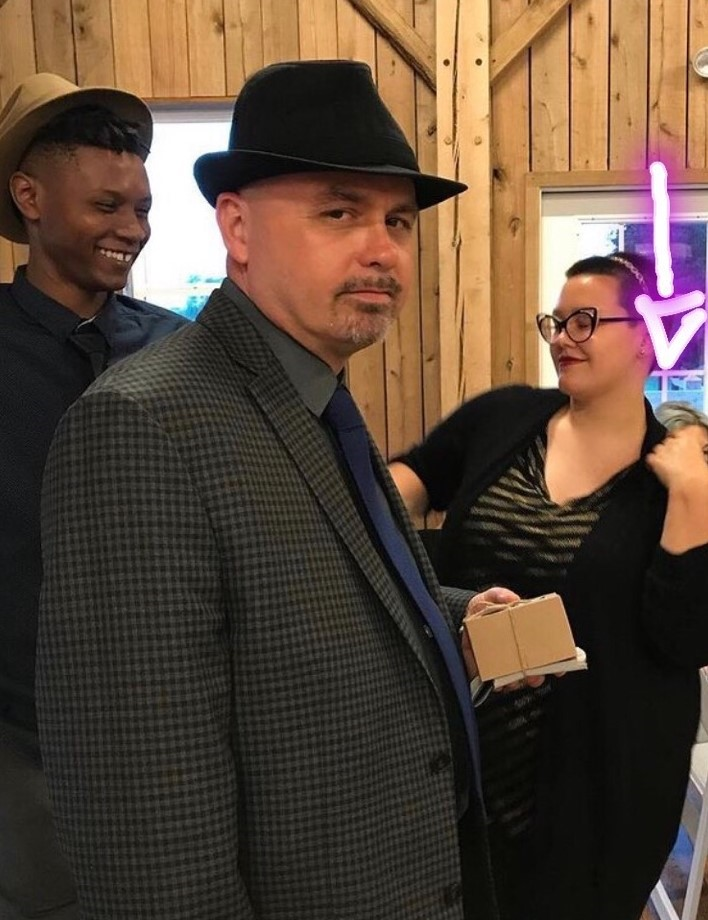 This edit (above) restored my sister’s hand, but it introduced a floating head. If you look at the blonde floating head and then look at my cousin-in-law (left), it kind of looks like he’s laughing at the floating head. Hmm. Still not a good crop. One more try… 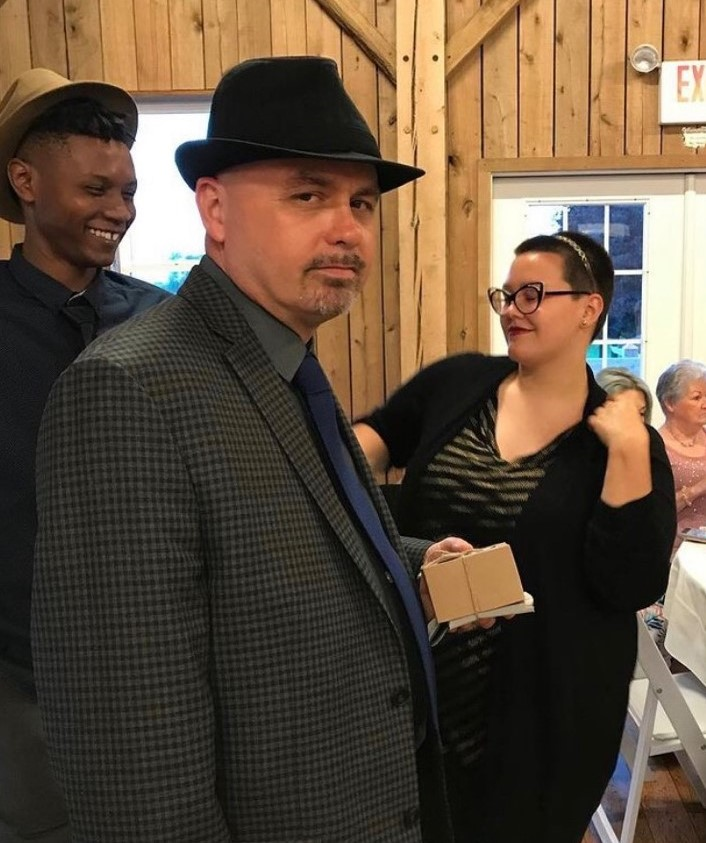 Voila! What you see above is the best edit I could have come up with. My sister’s hand is still there. The floating head is still there, but it’s not alone- you can see that there are two people (welcome back, Great Aunt Norma) sitting together. Now that the floating head has a friend, it’s not too creepy. This is the version of the picture that I was happiest with and gifted to my Mom.

If I remember correctly, I just got lucky with the picture. I had been trying to capture the essence of my sister and our cousin dancing. I had the camera pointed at them, and I was patiently waiting for my Dad to walk away. Instead of walking away, he turned to me and shook his head. I’m sure he wouldn’t have done that if he’d known that I had my camera app open. I like to take pictures, so I knew instinctively when to press the button and capture that look. It takes practice! The more you follow people around and try to sneakily take their pictures, the more you’ll pick up on that gut feeling.

The print made a good gift for my Mom because if you know my Dad and you’ve ever seen him make that face, then you can look at the still shot and see his head in motion- a slight shake of faux-disapproval or faux-disbelief. His eyes say, do you see these people?? It’s kind of like the look he makes when he talks about our cats (my Mom has four cats); he’ll say something like these cats are ridiculous, or we have too many cats, but he doesn’t really think that.
There are other strategies for taking candids. Here are two of Meredith, the same friend I mentioned in my first column. I often use her as an example because I know she doesn’t mind. 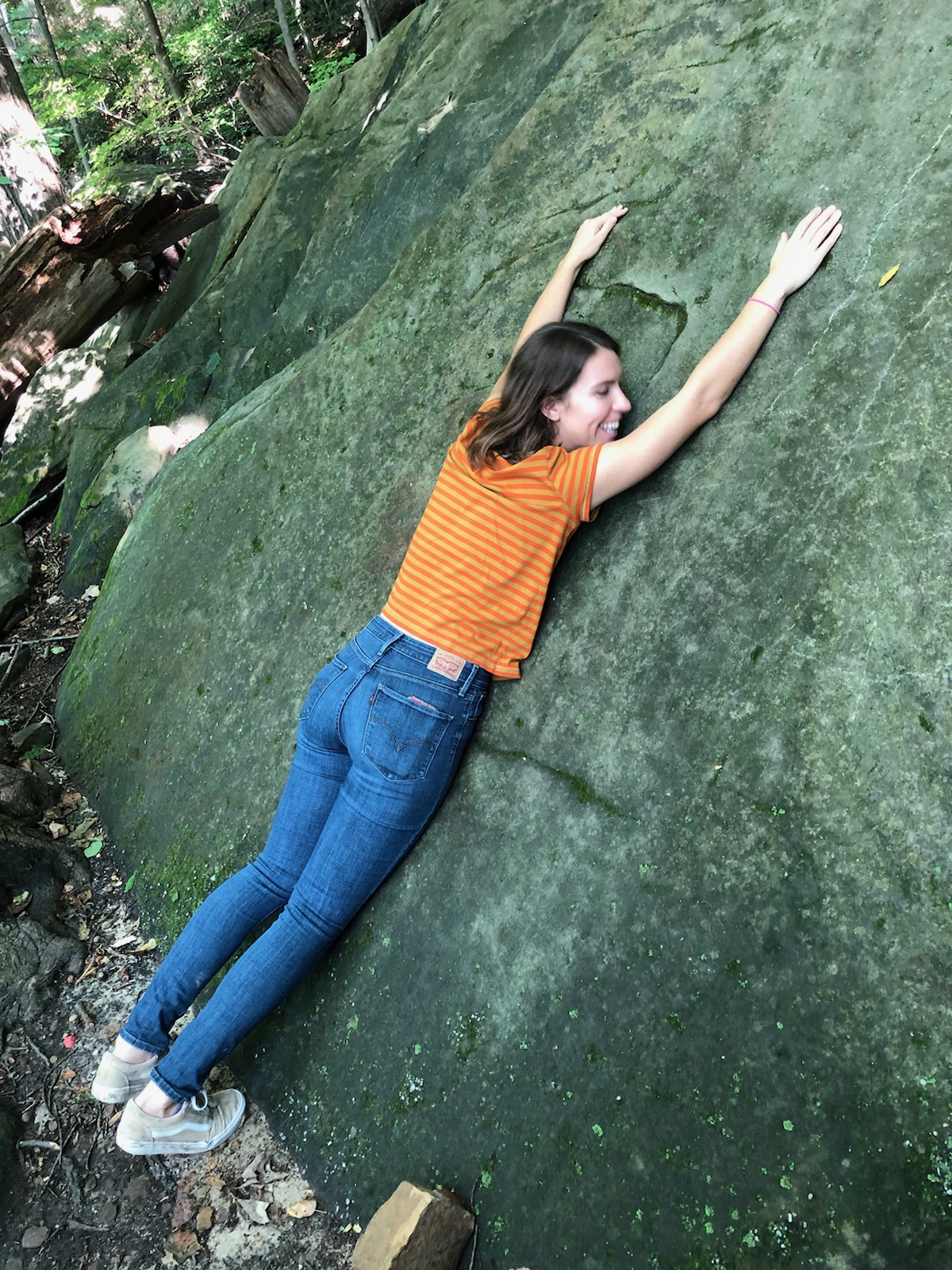 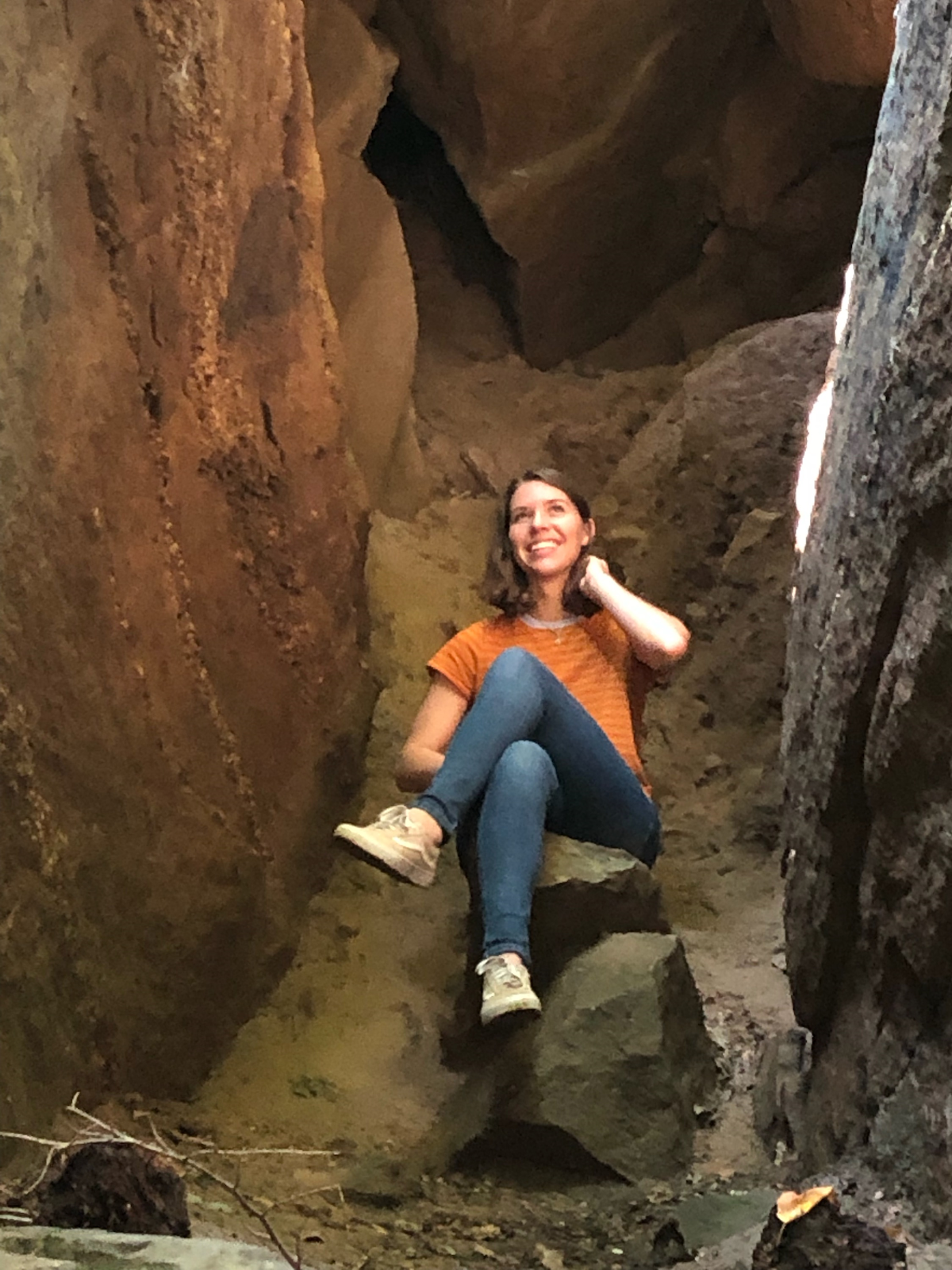 The second one is, in my opinion, too grainy to gift. It still serves as an excellent example of the strategy I’m about to explain! When I ask someone to pose, I take more pictures of them between poses than I do of them posing. I don’t do this with a continuous setting or a burst setting on my camera; I manually press the button as my subject moves around.

You could ask your subject to think of a few poses and have them pick one to start in. Once you get a few pictures of them in that pose, have them move onto the next one, and this is where you pay close attention- do they say anything to you between poses? Do they take a break and pull a funny face? The space between their poses is where you can get material that doesn’t look posed, even if it is, in a sense.

In the top one, where she’s hugging the rock, we had been walking past it, and I’d told her that she needed a picture beside it. In between takes, I’d said something that made her laugh, and since I am in the habit of keeping my camera open, I was able to get that good shot.

Knowing your camera means knowing its limitations. Even if you have a phenomenal, thousand dollar camera, there are probably some things that it can’t do. Cameras are like people- every single person cannot do every single thing. People have their limitations; that’s why the Earth comprises more than seven billion and eight hundred million people. There aren’t as many cameras out there, but there are a lot of different lens types. I’m not knowledgeable enough to get into that today; I only brought up the topic of lenses to further my analogy.

My smartphone doesn’t like it when I go to take a picture of something that’s in motion; moving objects are one of its main weaknesses. If my object or I move too quickly, I’ll usually end up with an entirely blurry picture, but sometimes only one element of the image is blurry. It can create a neat effect! Let’s take a look at these two examples: 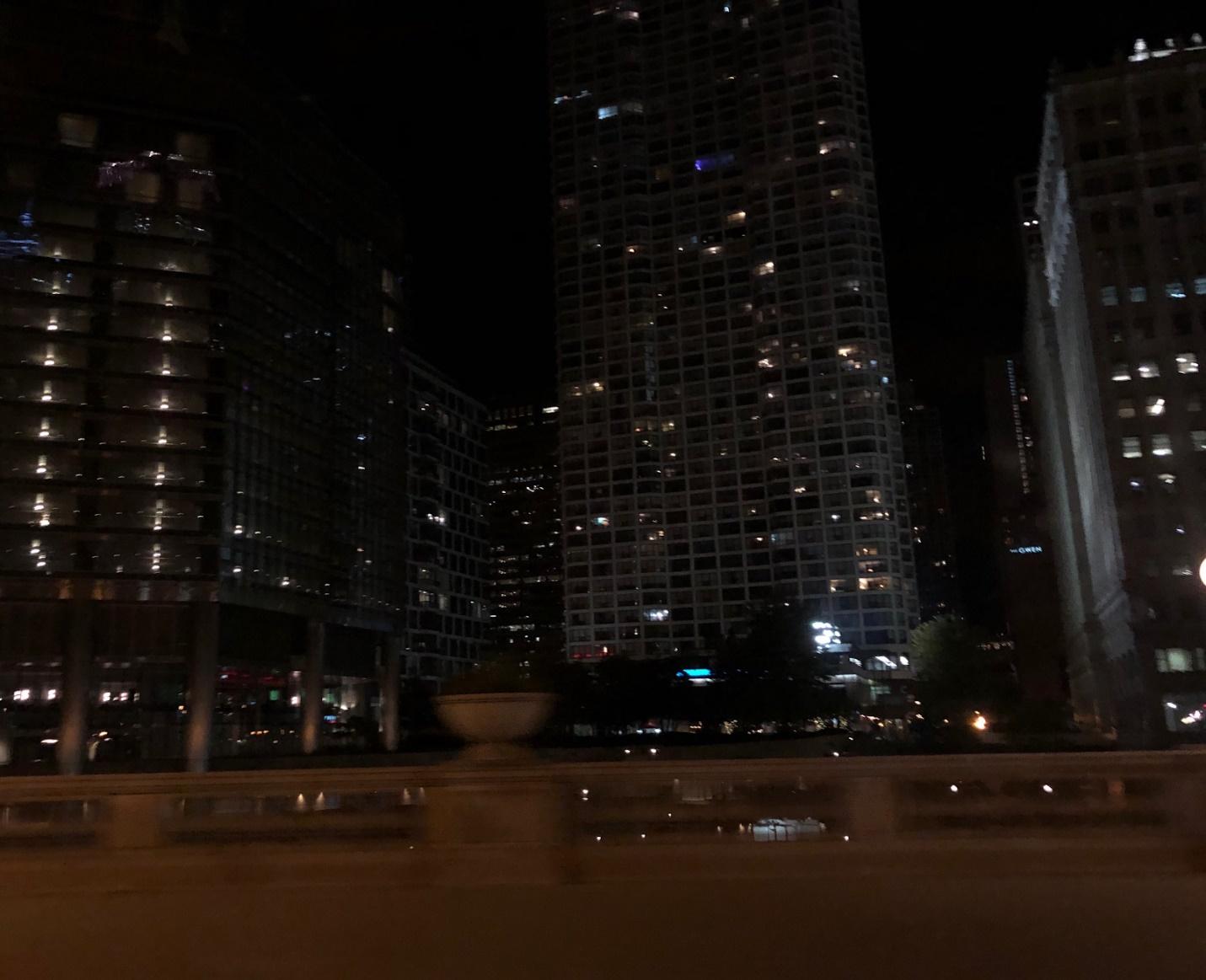 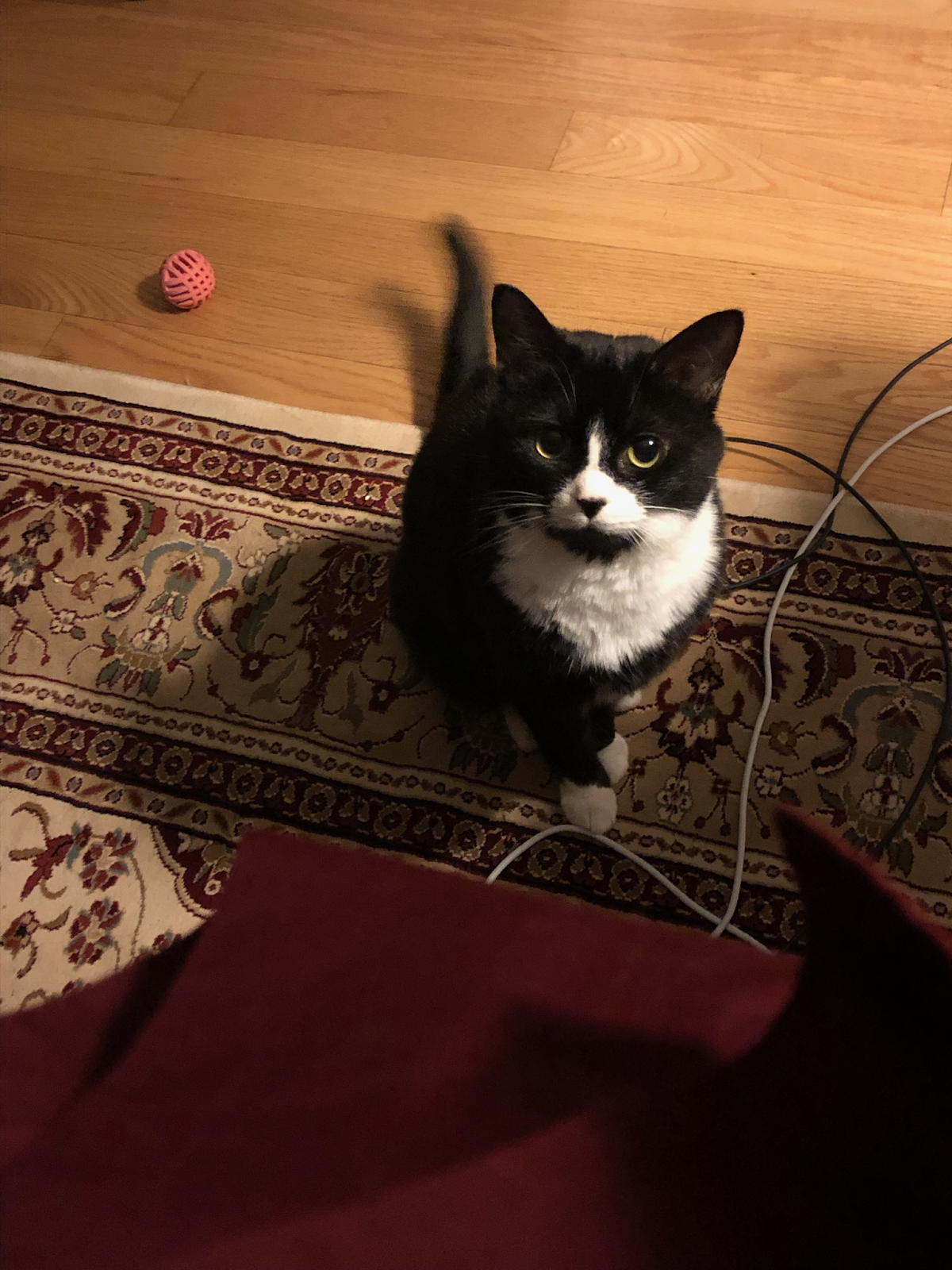 In the top picture, the first things I see are the potted plant and a couple of the skyscrapers towering behind it. That’s because those are the most stable parts of the image. On second glance, I also notice the blur of the bridge, the slight shakiness of the lights, and a blip of the water’s reflection. Look closely, near the bars of the bridge, and you’ll see it too. I took this picture out the window of an Uber. If I look at it for too long, it makes me miss Chicago! I’m glad I didn’t delete this picture at first sight or after glancing at its thumbnail. If you look at a thumbnail and decide that the image should be trashed, it might be worth a closer look before you hit that delete button.

In the second picture, my sweet little cat is peering up at me over the edge of the bed. She’s excited! Because it’s bedtime! Aww (how lucky am I??). If you know Tulip, you know that she loves to snuggle.

The blur of her tail tells us that she’s wagging it. When I took both of these pictures, I’d had this particular iPhone for two or three years, so I was already well familiar with its quirks. I knew that pictures could come out blurry. Yet, I still take pictures of moving things when I want to. Sometimes I’m pleasantly surprised! I can trick the camera into finding other focal points, and it may still capture what I want it to. This goes to show that when you set out to learn your camera’s limitations, you can find some workarounds along the way.

What if you have a picture that you like, but there’s something glaringly wrong with the lighting, as shown in the example below? 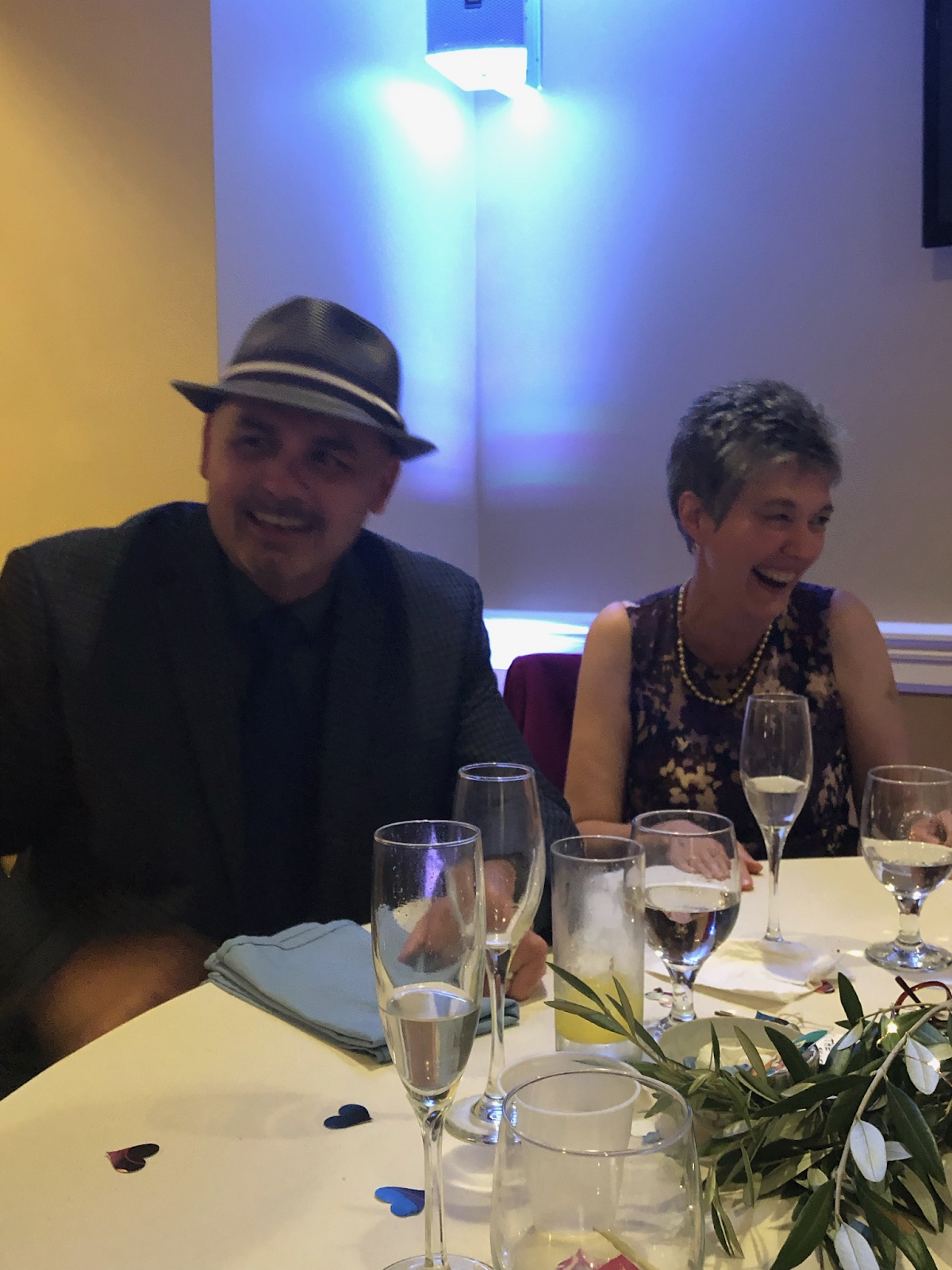 This example has the potential to be a good picture! Yes, my Dad’s hand is a little shaky, but this is another one of those cases where my camera’s main weakness adds something to the picture- it drives home the idea, the feeling of the laughter that my parents are experiencing. They’re telling a story together. Unfortunately, the bright blue of the light and the yellowness of the wall behind my Dad drown out my parent’s facial features. There are probably better ways to solve bad lighting (especially if you know how to use PhotoShop), but I found a quick fix on my phone by playing around with filters. 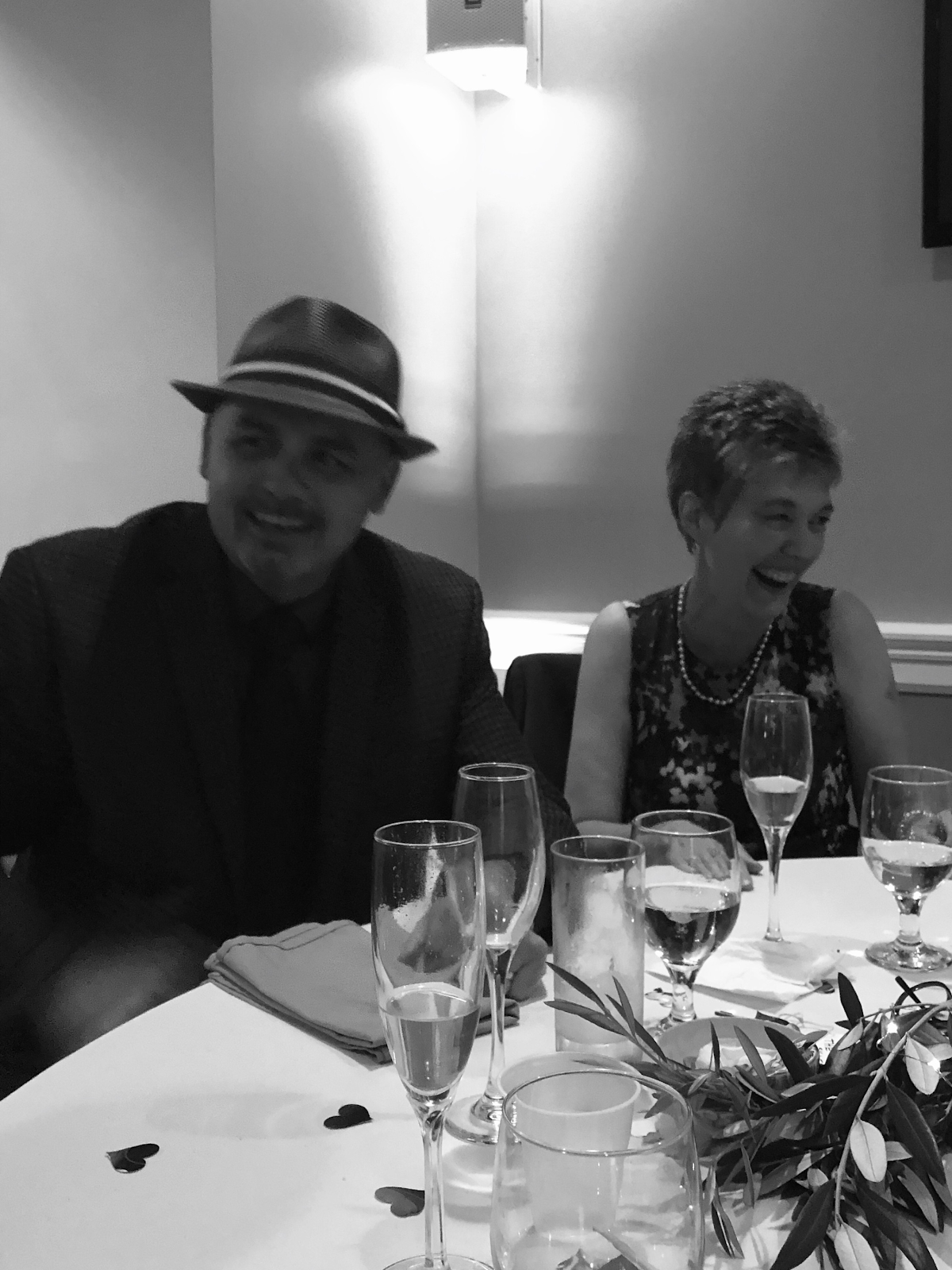 The light is still bright, but it’s been toned down. The walls behind them aren’t as distracting because their colors are muted. The burst of blue light on my Dad’s empty flute has disappeared. Overall, it’s a better look.

All of that being said, Christmas is coming up soon, and you might not have the time to hang around waiting for candids to happen. Besides, most people are trying not to gather right now. That’s okay! You could gift a selfie. I’m not the type to give a traditionally- styled picture of myself (yikes), let alone a selfie of only myself (big yikes), but these days the idea is totally valid. Depending on the selfie in question. How silly is it? Is it reminiscent of a special memory? The last two pictures I’m using are below. I wouldn’t gift the first one, but I’d probably gift the second one. 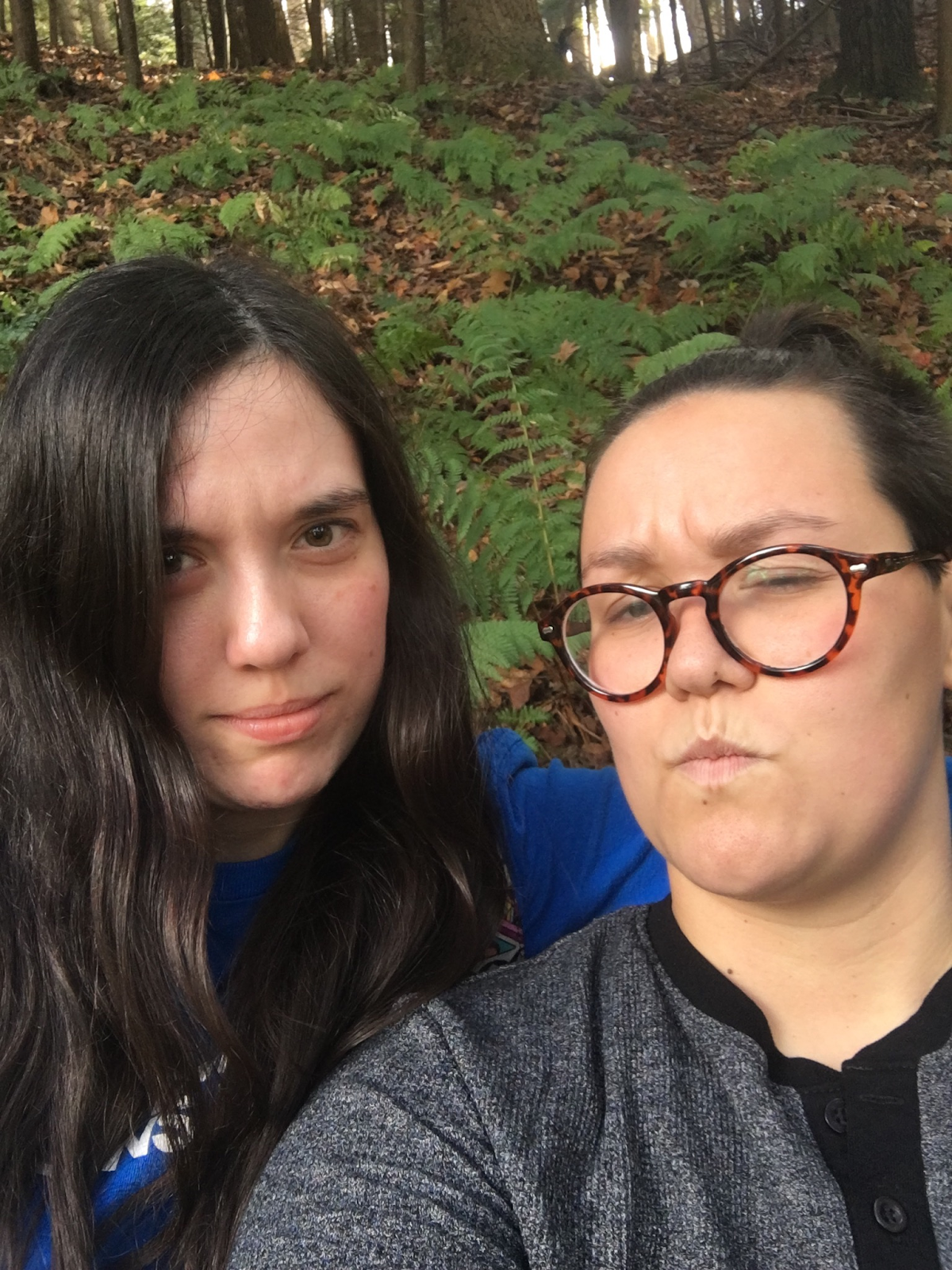 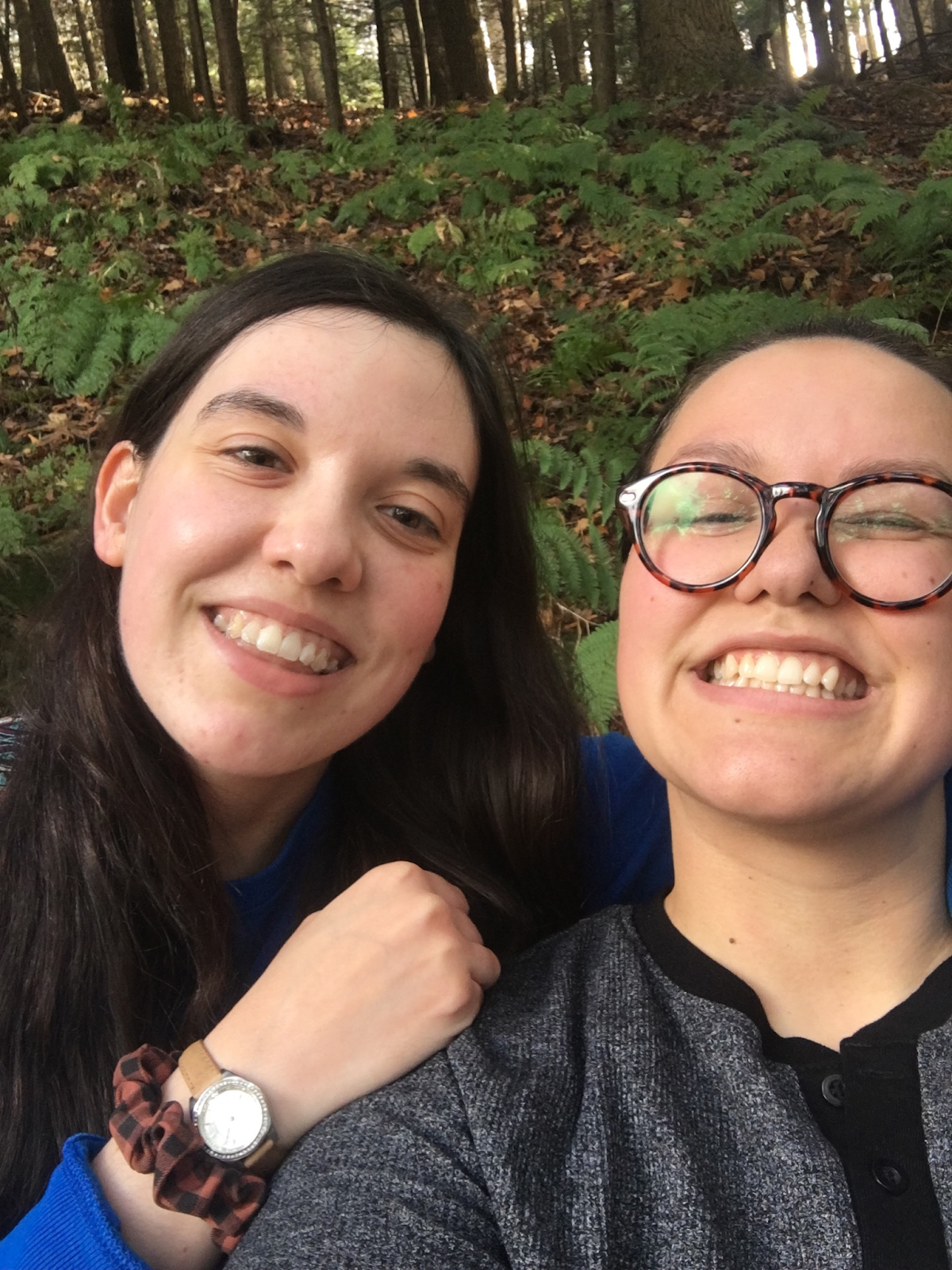 Personally, the first one is too silly for me. Though the second one shows us squinting into the sun, it isn’t bad. If I hadn’t already chosen all of my sister’s gifts, this might be a good gift for her. We went hiking at a nearby State Park a few weeks ago, and at the end of the trail, she taught me how to take selfies. She insisted. Partly because she couldn’t believe that I don’t know how to take a decent selfie and partly because the lighting was too good to pass up. You can see the Mohican Memorial State Forest behind us, so I could give the picture to her next Christmas- the backdrop serves as a reminder of where and when it was taken.

I was supposed to make a photo frame this week, but I started a new job (freaking 2020) and haven’t gotten around to it yet. I’m still going to challenge myself to make a frame! Crafty shtuff will definitely happen next week. I can’t wait to show you what I come up with. Until then, stay safe out there, and Happy Holidays!

S. Elizabeth Sigler has been published in Re-Side Magazine, Fembot Magazine, The Daily Drunk, Howling Mad Review, and From Whispers to Roars. She will have creative nonfiction in the January 2021 issue of Biological Creatures. She uses her spare time to read, write, and explore the world around her.